Those of us who attended Beaverton Grace Bible Church certainly know how much the pastor admired and respected John MacArthur.  I have heard first-hand from a pastor at Grace Community that Chuck O'Neal and others went to the Shepherd's Conference this year as they have gone many years past.

I'd like to remind my readers of a few quotes aimed at me because of Google reviews I posted.  Disclaimer:  You might need sunglasses/earplugs for the online shouting.

DEFAMATION IS A CRIME: It is convenient and crafty to wage a three and a half year war of reviling defamation in which you and those with you ACCUSE THE PASTOR AND CHURCH OF HORRIFIC CRIMES AGAINST GOD AND MEN, to then hide behind 1 Cor. 6:7-8.

FOR THREE AND A HALF YEARS JULIEANNE AND THOSE WITH HER, HAVE BEEN ENGAGED IN PUBLIC, CHURCH TO CHURCH, AND WORLD WIDE WEB DEFAMATION IN A SELFISH WILLINGNESS TO DISCREDIT GOD, HARM THE CHURCH, HARM WIVES, HARM CHILDREN, AND HARM THE TESTIMONY OF CHRIST'S GOSPEL.

IN MATTERS OF GREAT DAMAGE TO OURSELVES OR FAMILIES, WE MAY USE LAWFUL MEANS TO RIGHT OURSELVES. WE ARE NOT BOUND TO SIT DOWN AND SUFFER THE INJURY TAMELY, WITHOUT STIRRING FOR OUR OWN RELIEF;

John MacArthur was interviewed by popular blogger Tim Challies.  John MacArthur's words are very appropriate in light of the lawsuit my former pastor, Chuck O'Neal, has brought against me and three others.  Read what he has to say about public criticism against those who speak/preach publicly:


One final thought to add is this: I believe that it is appropriate to respond publicly to that which has been taught publicly. If someone has published something in a book or on a blog or preached it in a sermon (which has then been made available online), it is now subject to public critique. I certainly believe this is true with regard to my own teachings. Anything I have preached or published (and therefore made public) is consequently subject to public criticism. And I don’t consider my critics to necessarily be unloving just because they disagree with me. In fact, I welcome their feedback, because it is part of the sharpening process.   ( http://www.challies.com/interviews/5-more-questions-with-john-macarthur)

"Harming wives and children?  Discredit God?  Harming the church?  Accuse the pastor and church of horrific crimes?"  All of these strongly worded accusations because I, a mere stay-at-home homeschooling mother of 7, posted reviews on Google that the pastor didn't like?  All of this talk of war and crime, harming women and children?  I have spent countless hours working with new moms, helping them when they have babies, giving breastfeeding advice, counseling and support for as long as I can remember.  I have loved children my whole life, babysat, began a children's choir at the age of 19, taught children at homeschool co-ops for years and continue to teach my own as well as work with public high school students on a daily basis.  I'm a danger to mothers and children?   Neither of the last public schools I volunteered with on a daily basis seem to think I'm a danger.  I've passed background checks in the states of Oregon and Washington in order to volunteer in public schools.  Dude, I don't carry weapons, well, I admit to finding Nerf bullets in my pocket every now and then.   Oh wait, do knitting needles count?


(And yes, I actually got out of my nice bed with electric blanket, walked into the family room to get this shot for you, my beloved readers.) 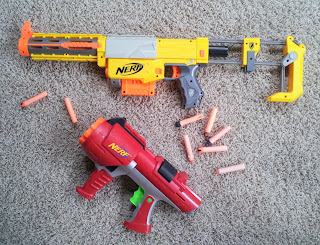 I may be freakishly tall and it is a fact that I have red hair and I've heard that red hair can intimidate some, but I'm not that powerful to wage a 3-1/2 yr "war" against God.  Does he think I'm that powerful?   The reviews are words expressing my thoughts, feelings, experiences, observations, and concerns.  Simply words.

It's too bad John MacArthur's method of looking at criticisms as part of the sharpening process wasn't adopted instead of wasting precious time, money, and resources from countless people.
Posted by Julie Anne at 8:33 AM