Muckraker asked great questions yesterday and I'll address them on this post.


MuckrakerJune 16, 2012 5:51 AM
Julie Anne: What does it mean "reviews are slowly being removed"? Who removes them?? Google? The church requests it? Or demands it with some kind of legal pressure?

I thought the whole point of online reviews is that "customers" can FREELY post their OPINION of a business.

If my memory serves correctly, I am pretty sure the church's reviews were numbered somewhere around 960.  Now they are at 933.   I assume that Google removes them.  I don't know if the church requests it or not.  I do know that Chuck removed some of my Google reviews from a while back and he admits it here in his declaration which was submitted to the court  (public information):

Perhaps someone complained about the Streisand Effect that occurred, that most of those new reviews are from people who have not attended the church and only responded because of the media.  I don't know if that is part of the Terms of Service or not (whether one must visit an establishment before reviewing), but it very well could be.  Someone told me that Yelp.com removed quite a few comments, too.  What a colossal waste of time to go one by one, removing reviews.

All I know is many of my Google reviews were removed over the 2-1/2 yrs.  I had to rewrite it from scratch and then finally got smart and saved it on my computer, anticipating their removal.    For a time, I was unable to post any Google review on the church's review site.  That was strange.

I don't understand how he was able to get them removed because I, too, tried to get Google to remove a few reviews which I believed to be defamatory, not only that, they were reviewing ME, not the church.   I received these generic responses from Google:

Thanks for reaching out to us!

We have received your legal request. We receive many such complaints each
day; your message is in our queue, and we'll get to it as quickly as our
workload permits.

Due to the large volume of requests that we experience, please note that
we will only be able to provide you with a response if we determine your
request may be a valid and actionable legal complaint, and we may respond
with questions or requests for clarification.  For more information on
Google's Terms of Service, please visit http://www.google.com/accounts/TOS

We appreciate your patience as we investigate your request.

And then I finally received this response nearly 1-1/2 weeks later:

Thanks for reaching out to us.

Based on the current information, we are not in a position to adjudicate the validity of the claims alleged by your note. If you're concerned about the content, we suggest that you directly address your concerns with the author of the content in question.

If you choose to pursue legal action against the individual who posted this information and that action results in a judicial determination that the material is illegal or should be removed, please send us the court order so that we can take appropriate action. In cases where the author is anonymous, we can provide you with user information pursuant to a valid third party subpoena or other appropriate legal process against Google Inc.


Some attorneys I spoke with said that he could have had an attorney write a letter on behalf of the Church requesting they remove reviews or face legal action.  It would probably be easier for Google to remove the reviews than face possible legal action.  Who knows!  I wonder how much it would cost to pay an attorney to write up a threatening letter?

Some people also uploaded some crazy pictures to the church's Google review site during the media frenzy and most of those have been removed (devils, witches, and bizarre stuff).   How did they get removed?  The same process?  A photo of Josh Groban is currently posted and I really wish Josh Groban would stay out of that church for the time being.    The picture below was one that was removed and was my favorite (and the only one I saved).  Notice the names on the sign:  "TODAY'S HERETICS:  MR. AND MRS. SMITH" - lol.  I have been told that I have a warped sense of humor. 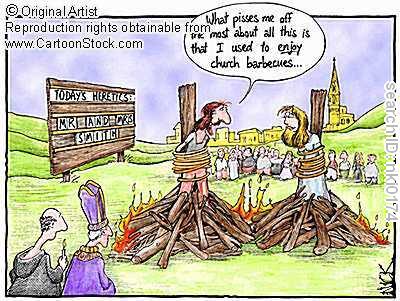 So, evidently, Muckraker, Google will yank posts if someone requests it, but I don't know how to work that process.  I certainly wasn't going to hire an attorney to threaten Google.  Maybe my former pastor did.  I find it interesting that Google tells me that I have to provide the court order for them to remove posts, but they didn't require it from the pastor (because there wasn't and isn't a court order as of this posting).   I also still don't understand why they allowed the reviews of ME.  Below are a couple examples that I sent to Google and show how Chuck and Stephanie were reviewing me and not using the review forum appropriately to review the establishment.


LANGDON who is likely JulieAnne, is wielding 1 Cor. 6:7-8 in order to further defame BGBC and Pastor Chuck O'Neal. It is convenient to wage a three and a half year war of reviling defamation in which you and those with you ACCUSE THE PASTOR AND CHURCH OF HORRIFIC CRIMES AGAINST GOD AND MEN, to then hide behind 1 Cor. 6:7-8.


JA's side note #3:  Has anyone figured out what kind of horrific crimes I have committed?  (BTW, is that defamatory?)  When I think of horrific crimes, I think of murder, rape, armed something or other.  Meanwhile, I sit at home, make mac n' cheese for the kids, do laundry, read stories, yell at kids to quit fighting over the Wii controls.  If that's criminal activity,  all moms are busted.

Keep in mind when the above reviews were added, it also upped their rating because they were rated 5-stars.  Now, if they were rating me, Julie Anne,  as 5 stars, that's one thing, I guess Google would need to give me a review site.   But their 5-star review of "me" bumped up the church's positive ratings (and of course it was significant at the time there were only a few reviews on the site).

Crazy stuff, I tell you.  Well, Hannah and her boyfriend will be visiting this weekend.   I can't wait.  It's supposed to be 90 today and in the 80s tomorrow.  We'll be doing some co-ed swimming at the pool and our swimsuits don't look like this: