Godly sorrow brings repentance that leads to salvation and leaves no regret, but worldly sorrow brings death.  See what this godly sorrow has produced in you: what earnestness, what eagerness to clear yourselves, what indignation, what alarm, what longing, what concern, what readiness to see justice done. At every point you have proved yourselves to be innocent in this matter.  Great commentary:  2 Corinthians 7:10-11

I've been reading some news articles lately which have reminded me of my case.  My former pastor was pretty irate about I said in my Google review regarding a known sex offender having access to the church nursery.   When the media initially reported of the story, the public overwhelming sided with us.  However, after the second hearing, the media took off on the particular phrase about the sex offender.  Some people thought I was out of line for saying that phrase.  They could excuse the rest of my comments, but not that one.  This was the first time in the case where I noticed people coming to my former pastor's defense.

My former pastor was livid that I mentioned that there was a known sex offender who had access to the nursery.  All I know is what I saw.  I remember a teenage boy (who was later convicted as a sex offender) who was in the nursery when I was there.  My pastor was the one who made the choice to NOT disclose this information to authorities.  As I recall, documents showed that he knew about the sex offender some 8 months before authorities were notified.  Authorities were notified by a former church member who also was later brought into the lawsuit.  He wanted to handle this sex abuse situation within the church.   In the hearing, we heard that the sex offender remained in the same house as the victims.  I repeat . . . . day in and day out, the known perpetrator was allowed to remain living in the same vicinity, same home, same church as the victims.  This appalled me.

Here is a screen shot of a relevant court document.  I intentionally blanked out names involved, so unfortunately it is a bit more difficult to read:

My former pastor and his wife said some pretty strong words about me here in this interview.   You can forward to :25 mark to see for yourself:

Here's the deal.  If my former pastor lived in Oklahoma, his name might be in the headlines like employees from this church:

The Tulsa County DA has filed charges against five employees of the Victory Christian Center for failure to report child abuse.

Paul Wilemstein, Anna George, Harold "Frank" Sullivan, Charica Daugherty and John Daugherty are all charged with misdemeanor failure to report child abuse. Sullivan is the director of Human Resources at VCC.  John is the son of VCC pastor, Sharon Daugherty, Charica is his wife.  Monday night, all five were booked into the Tulsa Co. Jail. Several hours later, all were released on on $1,500 bond.

The charges stem from recent allegations of a rape at the center.  Former VCC employee Chris Denman, 20, was charged with first degree rape of a victim under 14, forcible oral sodomy, lewd molestation and the use of a computer to facilitate a sex crime on September 13th.  The alleged victim's mother said the incident happened in August, and she did not hear about it until more than two weeks later.

And here's another case where a bishop failed to report suspected child abuse by a priest and was sentenced:

Bishop Robert W. Finn, 59, is the highest-ranking Catholic official to be convicted during the church's long sexual abuse scandal.

So while my pastor complained about me and my remarks about a sex offender in the nursery, the only reason why my pastor was NOT arrested was because of the provision in the Oregon law regarding “privileged” communication for clergy.

Here's a helpful overall view of the mandatory reporting laws for clergy (Clergy as Mandatory Reporters of Child Abuse and Neglect: Summary of State Laws).

I have not been able to figure out why the bishop in the CNN article above was arrested because the information on this chart seems to indicate Missouri would have given the bishop an exemption with the law allowing for "pastoral communications".   Any ideas? 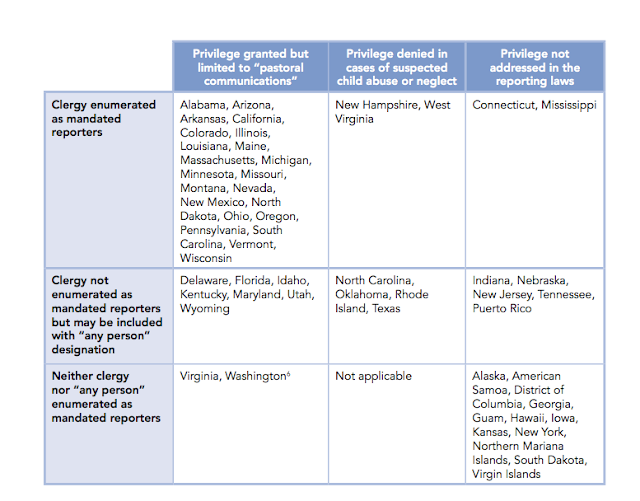 So what do you think about these clergy laws?  Should all clergy be mandatory reporters with no limitations?  Or do you think clergy should be able to handle abuse cases in-house?    When does abuse cross the line from a church issue to an issue where the civil authorities should be called?  Who gets to decide these issues? 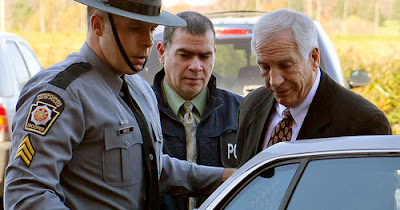 On some issues, I'm torn.  A case where children are playing "doctor" which ventures into sex exploration on one occasion does not equate with gross sexual abuse.  In my lawsuit in which I wrote about the sex offender having access to the nursery in the Google review, I was shocked to find out that the victims were still living with the sex offender.  I know from my time at that church that outside counseling for the victims or perpetrator would have been frowned upon.   I do not believe that this family would have had the proper care or counsel without outside involvement.  What we saw in that particular case was an offender who was confined to his locked bedroom at night.  In the court hearing, we heard about a system of alarms that were set up within the house so the offender's whereabouts was known at all times.  I later heard that he was never supposed to be alone at church (there was obviously a lapse in that system because I saw him a number of times alone in the nursery area).  No system is fool-proof - but setting up alarms, making sure he wasn't alone only addresses part of the issue.  What about the rest of the story - - proper care and counseling for both victim and perpetrator?   I believe that in situations such as this one, the pastor and elders were very ill-equipped to handle something of this magnitude and actually could have done more damage to the victims, or perhaps even others outside of the family because of  lapses.

With the Penn State fiasco, sex abuse in the Catholic Church and so many other cases in the news lately, I do not believe we are done with this issue - not by a long shot.

photo credit: marsmet551 via photopin cc
Posted by Julie Anne at 8:44 AM

Email ThisBlogThis!Share to TwitterShare to FacebookShare to Pinterest
Labels: Sex Abuse and Church