Raymond has been a regular blog reader and his very sad personal story is posted here:  Can Spiritual Abuse Destroy a Marriage?  Paul's Story.  At that time, he was going by the pseudonym, "Paul".  Raymond is trying to move on with his life after his heart-wrenching church experience.  It has now been around 9 months since he has spoken to his wife (or possibly ex-wife - he hasn't seen court documents yet).  Obviously, this has been a difficult journey for him.

We had some interesting discussion after posting a reader's question discussing:

How can we best help friends who remain in an abusive church?

I enjoyed reading Raymond's perspective on wolves and sheep as it relates to an abusive church environment and decided to compile the bulk of his comments into a separate article. 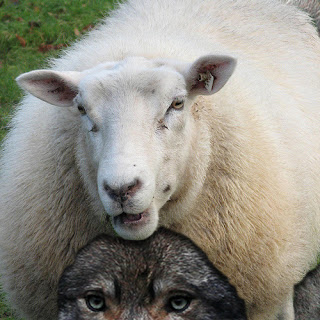 The question:  How can we best help friends who remain in an abusive church?


What I have found is that the wolf that is dressed in sheep’s clothing will always be a wolf.  When someone in the flock exposes the fact that he is a wolf, he just rearranges his sheep’s clothing to cover up that which might have been exposed and the majority of the sheep never know the difference.


The sheep that exposed the fact that indeed he is a wolf are quickly eliminated from the flock. There are even some sheep who see the ugly fangs, but are too afraid of leaving the flock because of what might lie on the other side of the hill.  They are just like sheep, they don't look any further than the sheep next to them and do as they do, they never raise their head above the flock to see exactly where the lead sheep (wolf) is leading them.


Jesus couldn't have used a better animal to illustrate His church.  Sheep have to travel in flocks to survive and the wolf is the sheep’s number one enemy. So when a wolf has gained entry into a flock of sheep, his number one goal is to satisfy his appetite. This has been going on for thousands of years in the wild and the only way to protect a flock of sheep is to eliminate the wolf.


Julie Anne asks:  So, how does that sheep finally see the wolf for who he is?  What is your opinion of this - do you think it is because someone from the outside told him? Or did he discover it on his own?


Very seldom does someone on the inside listen to someone from the outside. I think it's really the Holy Spirit that exposes the truth and sometimes it takes years for someone to take action. I know by my own experience I have straight up told others that things being done at the church were in violation of the law and not one person acted even the least bit concerned but only commented that if anything illegal is going on, whoever was responsible would one day have to answer to God.

People don't want to know the truth if it affects their routine or their comfort zone.  Again, just like a flock of sheep, as long as the grass is green, they keep their heads down and follow the other sheep or what looks likes another sheep. The flock gets so big that if one or two or three or even more turn up missing, they are not even noticed. Other stray sheep quickly fill the empty spots to supply the appetite of the wolf that walks freely among the flock dressed in his sheep clothing.


From the same Google search you can see the natural behavior of a wolf.  Again you can see why this animal was used by Jesus to illustrate its relationship to the sheep and the church.  Do you have any wolves in your life?


Wolves are highly territorial animals and generally establish territories far larger than they require to survive in order to assure a steady supply of prey.  Territory size depends largely on the amount of prey available. . .


The stalk: The wolves attempt to conceal themselves as they approach their prey. As the gap between the wolves and their prey closes, the wolves quicken their pace, wag their tails, and peer intently, getting as close to their quarry as possible without making it flee.  Source


I think we all know what comes next, but for most it's too gruesome to describe: 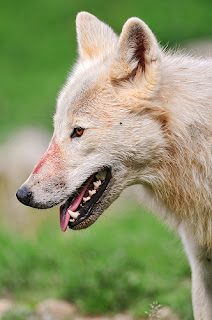 There is one final Google search to conclude the sheep and wolf discussion:   the position and duty of the shepherd.

The duty of shepherds was to keep their flock intact and protect it from wolves and other predators.  Source


As you can see the shepherd is not one of the sheep, but someone that keeps the flock in intact and protects the flock from the wolf and other predators. This would have to be someone who is of higher intelligence than the sheep and also one who would be able to spot and expose any threat to the sheep.


In today’s churches the Pastor tries to take this role and may place themselves above the sheep (congregation). The problem with this is that in reality he himself is only a sheep (or a wolf in sheep clothing). There is no possible way that he can know all the sheep and thus there is no way he can keep the flock intact. There is only one true Shepherd who can know all the sheep and keep the flock intact, and that is Jesus.


This is why today's churches are turning into toxic and abusive sheep farms. The flock has moved away from the protection and guidance of the true Shepherd and are following other sheep that might or might not be leading the flock in the right direction. So you need to stop and look at who you are following and if he looks like a sheep, smells like a sheep and acts like a sheep, he is probably a sheep or he could be a wolf in sheep clothing. Say something to make him smile, if you see fangs, thats a dead giveaway. Otherwise, check to make sure where he is leading you lines up with the words spoken by the real true Shepherd, Jesus.   And if it doesn't, run as fast as your little hooves will carry you and find a flock that is following the Great Shepherd.  Otherwise, you take a chance of becoming lamb chops for the wolf you are following.

Having grown up on a farm, I know what it's like and what is required to herd animals.  I find it quite amazing that the example we are familiar with in scripture consisted of 100 sheep.  Having herded cattle, I know that it is a handful for one man to control 100 cows.  So I would expect 100 sheep is most likely all that a shepherd can manage alone.

In modern sheep farming, the only way the shepherd can manage a flock of 200, 300, or 1,000 sheep is with the help of well-trained and devoted dogs - dogs that use fear to move the flock in the direction the shepherd desires, but dogs which are 100% devoted to every command of the shepherd who owns them.  They don't ask any questions, but respond to every order given them -  even when he is leading the sheep to slaughter.  This way, the single shepherd has complete control over all his flocks and his dogs.  It's kind of weird, but plenty of today's churches are operated like modern sheep farms, right down to the trained dogs.


Julie Anne's notes:  Of course there are no perfect analogies, but in this brief look at the behavior of sheep and wolves, we can easily understand why these animals were used in scripture to help us understand abuse in the church.  Sheep mixing with wolves is not a pretty scenario.  It's clear why we need to learn to behave smarter than dumb sheep, to look to the good Shepherd to guide us and keep us safe from the wolves who want to devour our souls.

Quick note to Raymond:  Thank you for giving me permission to compile your words into this post.  We will never know how many people were touched by your words.  I appreciate you sharing from your heart.