C.J. Mahaney's Philosophy on Friends: Don't Bite the Hand that Feeds You

"For you yourselves know, brothers, that our coming to you was not in vain. But though we had already suffered and been shamefully treated at Philippi, as you know, we had boldness in our God to declare to you the gospel of God in the midst of much conflict. For our appeal does not spring from error or impurity or any attempt to deceive, but just as we have been approved by God to be entrusted with the gospel, so we speak, not to please man, but to please God who tests our hearts. For we never came with words of flattery, as you know, nor with a pretext for greed—God is witness. ..."1 Thessalonians 2:1-20 ESV

It's been over a month since Sovereign Grace Ministries (SGM), C.J. Mahaney and others were named in a lawsuit for mishandling of sex abuse cases, etc.  I've been following this story for over 5 years because the spiritual abuse tactics and how they handled sex abuse cases in the church resembled what I experienced at my former church (the same church/pastor who sued me and 4 others for defamation for $500,000).  Reading this post, we will discover another pattern used by these types of pastors.  It's an important pattern to note.

Some may recall that last year, C.J. Mahaney stepped down from his position as president, taking a leave of absence to do some soul searching on accusations brought before him.  Some of these accusations stemmed from a 600-page document written by Brent Detwiler which was released on the internet.  Instead of C.J.  remaining at his home church, Covenant Life Church (CLC), to deal with his issues and putting himself around his church's elders for accountability, he went to his BFF's (best friends forever) church, Mark Dever at Capitol Hill Baptist to hide  worship.  Those who have been involved with SGM have stated that no other pastor or leader would have been allowed to leave a SGM church while being under scrutiny, but the pattern we see in these kinds of churches is that the leaders don't have to go by the same set of rules that they enforce on other pastors/leaders.  JA conclusion:  C.J. Mahaney thinks he is special and gets a free pass to do as he pleases without regard to the rules he has set in place for those beneath him.

One other notable aspect of C.J. is his many close buddies.  Immediately after C.J. publicly announced that he was going to be taking a leave of absence, a number of his celebrity pastor BFFs came to his defense publicly:  Al Mohler (this article is really good, btw), Ligon Duncan, Ray Ortlund, etc.

Many bloggers, including yours truly, have been watching and waiting for C.J.'s celebrity friends to issue some sort of public statement since the lawsuit went public.

What is the response from C.J.'s friends?  zilch, nothing, squat, nada!!

Blog queens, Deb and Dee from The Wartburg Watch have been keeping track of the number of days  gone by without a response and have it posted on their blog front and center here:

It really makes you wonder why are these celebrity pastors silent?

It looks like CJ's buddies don't have a problem with this lawsuit as evidenced by this:

The 2013 National Conference of the Gospel Coalition lists C.J. Mahaney as one of the speakers.  Take special note of who else is speaking:  C.J.'s good friends!!!  Here are just a few:

"These are grumblers, malcontents, following their own sinful desires; they are loud-mouthed boasters, showing favoritism to gain advantage."Jude 1:16 ESV


Ok, so why would these guys want to share a platform with someone who has so much controversy?  Quite a few SGM churches are leaving the group because of all the controversy.  What about those folks?  Are their arguments valid?  The stories we have read about abuse cover-ups are shocking.  Do C.J.'s buddies not care?  Are they not concerned about the spiritual abuse and sexual abuse cover-ups that have been made public?  Why are they willing to overlook it?  My brain demands, WHY????????????

And then I noticed C.J.'s Twitter account.  A lot of celebrity pastors are taking advantage of social media, like Twitter, to connect with people who follow them.  Check this out - - - as of the time of this screen shot, C.J. has over 23,510 followers.  Presumably most of his followers are people who want to hear what he has to say and probably a good many of them have a lot of respect for him.  That's quite a platform of followers, isn't it, when can you say something and have 23,510 people read your words in an instant?  Whoa!

I am following him because I want to know what he's saying to his wide audience.  Well, I've been getting an "earfull". 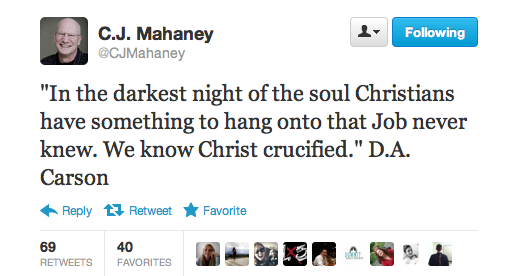 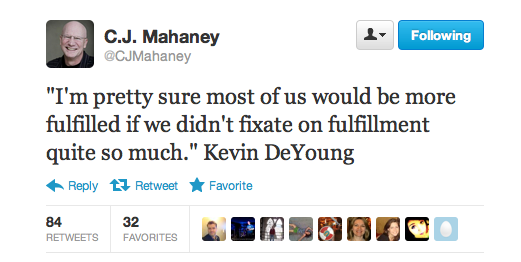 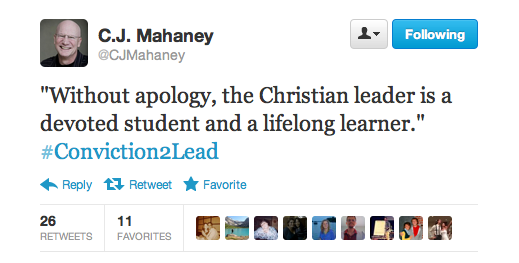 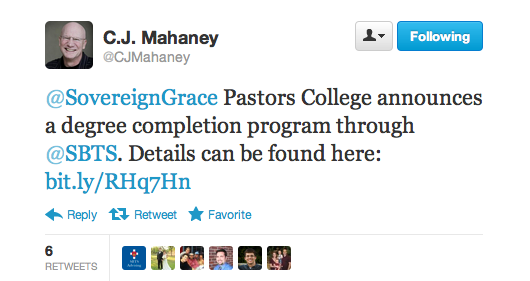 "For such people are not serving our Lord Christ, but their own appetites. By smooth talk and flattery they deceive the minds of naive people."
Romans 16:18 NIV 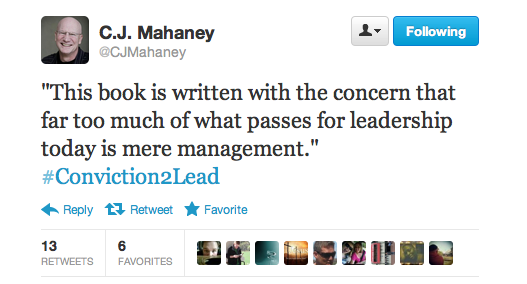 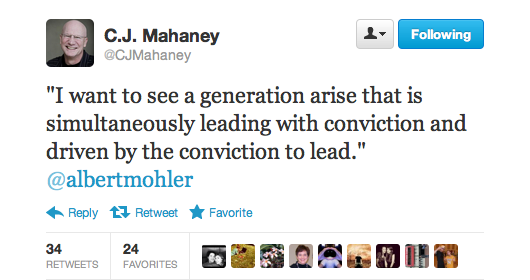 "I will not show partiality to any man or use flattery toward any person. For I do not know how to flatter, else my Maker would soon take me away."Job 32:21-22 ESV

Those are seemingly nice tweets, right?  But what do you notice about these tweets?  Notice the people connected with them?  Are you seeing what I'm seeing?  He's giving shoutouts to his friends - people he rubs shoulders with at conferences and people he endorses on book covers.  There's a big concentration of Al Mohler shout-outs - probably because SGM recently moved their headquarters to be near Mohler's Southern Baptist Theological Seminary.  This is an excellent article discussing Mohler's alliance with Mahaney.  Of course CJ is giving accolades to Mohler and endorsing his new book, Conviction to Lead.

Are you familiar with the expression:  "don't bite the hand that feeds you?"  That comes to mind as I read these tweets.  It would be pretty uncomfortable to be a close friend of CJ's and then speak out publicly against him when he is publicly endorsing you to literally thousands.  It sure seems that C.J. is flattering his friends into silence and they are too weak to stand up against it.


"For the word of God is living and active, sharper than any two-edged sword, piercing to the division of soul and of spirit, of joints and of marrow, and discerning the thoughts and intentions of the heart."
Hebrews 4:12 ESV

Email ThisBlogThis!Share to TwitterShare to FacebookShare to Pinterest
Labels: It's All About the Image, Lawsuit, Sovereign Grace Ministries Abuse, Spiritual Abuse