Pastors Who Fail to Report Abuse: Conspiracy of Silence

“This was not a mistake, this was not an oversight,” Kelly said at a press conference Thursday afternoon. “This was a conspiracy of silence by top officials.”

As much as the Penn State grieves my heart because of so many victims and the pain that they endured,   I believe this case is going to be pivotal in not only secular circles, but also with regard to how churches handle sex abuse cases.  We've seen outrage in the Catholic church and Boy Scouts sex abuse cases, but for some reason the Penn State scandal has really touched nerves in a big way.  The Penn State case shows a massive system of cover-ups from college football coaches to key leaders in the college.  And now the president has been charged with eight criminal counts in his "conspiracy of silence".  The effort that went into covering up these atrocities is flabbergasting.   If these men were fathers, I don't understand how they could sleep at night knowing little boys were being hurt in such cruel ways.   One by one, people who were involved in keeping the Penn State scandal silenced are now being investigated for their own criminal activity - the criminal activity of remaining SILENT.

Spanier, 64, is charged with perjury, two counts of endangering the welfare of children, obstruction of an investigation, failure to report child abuse and three criminal conspiracy counts. Kelly said that a grand jury investigation had difficulty getting information from Penn State until Spanier and two other top officials were forced out of their jobs soon after Sandusky was arrested last November.

“This was not a mistake, this was not an oversight,” Kelly said at a press conference Thursday afternoon. “This was a conspiracy of silence by top officials.”

This should serve as a wake-up call to pastors.   Those pastors who think they can harbor sex offenders in churches, cover up abuse, interfere with those who want to contact civil authorities, interfere with victims who are seeking counseling, fail to report to authorities those who are suspected of committing crimes against children. . . . .it is a new world now.  People will not tolerate such behavior anymore.  Pastors had a free ride before, but the climate is changing.

I hope my former pastor is reading this.  He was so annoyed that I accused him of harboring a sex offender in church.  What I said was true.  Had it not been for Meaghan reporting to authorities, the (now convicted) offender could still have been in the church with parents having no knowledge to protect their children.  I think we figured at least 8 months had gone by with the pastor  "handling" the situation "Biblically".  You see, if a pastor handles something in a "biblical" fashion, that convinces everyone that it's the right way to handle it.  You can't argue against "biblical".  @@ ja rolling her eyes

If they know of people in the church who have committed CRIMES, they have a moral and legal responsibility to report it.  Pastors can deal with the sin issue of the suspected offender AFTER authorities figure out how to handle the situation.  Pastors are free to visit the suspected offender while they are in custody, behind bars, etc, and then handle it "biblically".  I'm sure the offender would appreciate the visit.  But to remain silent about known crimes is wrong and I'm sure the Penn State President has some regrets about his inactivity and silence.

The timing of Sovereign Grace Ministries (SGM) lawsuit is striking considering the newest developments in the Penn State case.  So, meanwhile at the ranch . . . . I thought it would be interesting to see what SGM people are up to since their press release where they attempted to convince the world that they really care about victims and their families.  One of the best ways to keep up with people in their daily happenings is on Twitter.  It's public and SGM pastors frequently use it:

Another big thing in the works is a reworking of SGM's polity.  Deb from The Wartburg Watch blog has a post about that here:

CJ Mahaney began a new website and podcast with his son, Chad to discuss sports: 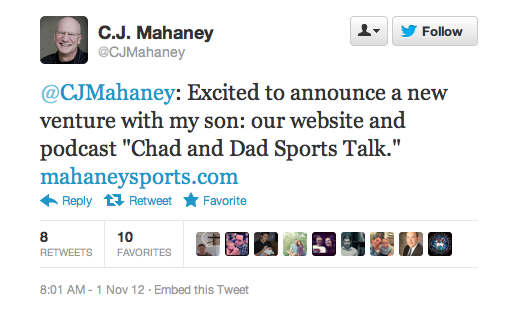 This past week there has been a SGM Pastor's Conference in Florida.  Ligon Duncan was one of the speakers.  Some may remember that Ligon Duncan is a close friend with CJ Mahaney, fellow member of the Gospel Coalition,  and defended him publicly when CJ took a leave of absence last year.   Ligon has been notably silent about the SGM lawsuit, but came to help out his buddy by speaking at the conference. 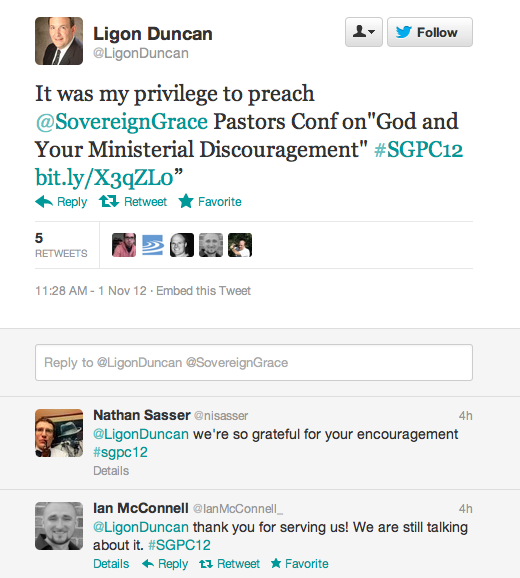 And now with the end of the conference, we can read tweets like this:

Ho hum, just another day in the life of SGM and their pastors.  The primary discussions seem to be about Pastor's Conference, the press release, redoing their polity, discussing gospel-this and gospel-that, joyfully serving one another.

But do we hear one word about those victims?  Nope.  Nada.