Courtship: The Background and Negative Outcomes


Soon I will begin posting personal courtship stories, so it might be helpful to get a little background of the history of courtship.  The courtship model is unquestionably a part of the culture of many conservative churches, conservative Christian groups, and promoted by leaders in the homeschooling community.  Some groups who have embraced the courtship model are:  Sovereign Grace Ministries (SGM), Doug Wilson, Family Integrated Churches (such as Household of Faith Community Churches),  ATI and Institute in Basic Life Principles by Bill Gothard, Steve and Terri Maxwell of Titus2.com,  Mike and Debi Pearl of No Greater Joy, Vision Forum - Doug Phillips, etc.  The Maxwells and Pearls are families who homeschool, full-quiver, speakers, authors, and promote courtship.  I'm sure there are more.

Bill Gothard taught a form of courtship in the 70s.  I remember reading documents and listening to Jonathan Lindvall cassette tapes on courtship in the early 90s called Youthful Romance.  I've read that Jonathan got his material from Bill Gothard who founded Institute in Basic Life Principles.

In 1997, Senior Pastor Josh Harris, the pastor at SGM's flagship church, Covenant Life Church, wrote a very popular book called, "I Kissed Dating Goodbye." when he was only 21 years old.  This book underscored what many church and homeschool leaders were saying all along, that modern dating is not healthy and recommended an alternative to recreational dating, courtship.   Josh had been in the limelight from an early age because his father, homeschool pioneer and pillar, Gregg Harris, took him on his speaking tours at homeschool conventions from state to state.  I remember seeing Josh manning his father's book table at homeschooling conferences.

Josh Harris was already popular among homeschoolers because of the magazine, New Attitude, he published from 1994-1997.  The magazine's readership was focused on homeschooled teens.  When Harrris published I Kissed Dating Goodbye in '97, it was well-received in homeschooling circles, but also ventured into mainstream Christianity.   I Kissed Dating Goodbye highlighted the negative aspects of recreational dating practices and provided a seemingly healthier and new alternative:  courtship. 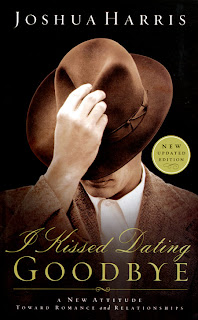 I was 21-years old when I wrote my story of giving up the dating game in order to focus on serving God. The hope behind it was that other singles would be helped by some of the lessons I was learning. Most people have an opinion about "that book about not dating." Some love it; others despise it. I'd encourage you not to assume you know what it says without having read it. Many readers who start out critics of I Kissed Dating Goodbye are surprised to learn that the core message of the book isn't about "dating," but living your life for God. ~Josh Harris 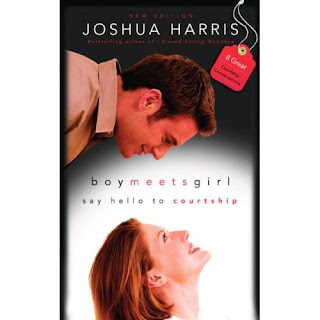 Here is the description from Amazon:

Purpose Driven Romance
The last thing singles want is more rules. But if you’re looking for an intentional, God-pleasing game plan for finding a future spouse, Joshua Harris delivers an appealing one. A compelling new foreword, an all-new “8 Great Courtship Conversations” section, and updated material throughout makes this five-year revision of the original Boy Meets Girl a must-have! Harris illustrates how biblical courtship—a healthy, joyous alternative to recreational dating—worked for him and his wife. Boy Meets Girl presents an inspiring, practical example for readers wanting to pursue the possibility of marriage with someone they may be serious about.

The summaries of these books come across as fairly decent, in fact, a lot of it still appeals to me today.  However, there has been a culture that has evolved since these books were published - not just at Sovereign Grace churches where Harris pastors, but throughout the interconnectivity of churches, homeschool groups, conferences, the internet, etc.

Josh Harris received a lot of feedback on both books, including negative feedback, and he tried to address those issues in an attempt to clear things up in a sermon called, Courtship Smourtship which can still be found here.

I found an old comment by Kris (blog moderator from SGMSurivvors.com) from April of 2008 on the I Kissed Dating Goodbye blog.  I realize this is an old comment, but it helps to illustrate how this courtship concept caught on and developed a life of its own in a negative way.

Kris Says: April 30, 2008 at 9:43 pm
It was my observation at our SGM church that the attitudes Josh Harris preached against in “Courtship Smourtship” were alive and well…and this was at least 2 years after he preached that sermon. Actually, “alive and well” wouldn’t do it justice. The paranoia about male-female interactions and the idea that “guarding one’s heart” meant running the other direction in the face of ANY sort of attraction – those attitudes were stronger and more pervasive than ever at the SG church we attended.

I don’t think any of the folks knew of Harris’ sermon. Or, if they had, by that time they’d taken his ideas and run with them to such an extent that they’d turned the courtship system into some sort of foolproof immorality-and-heartbreak-prevention-system.


Honestly, I believe that at our SG church, anyway, courtship was more about parents who wanted to control every aspect of their children’s lives than it was about actual purity. Purity may have been one of these parents’ well-intentioned goals for their kids, but purity can be accomplished in other ways, like equipping young adults to MAKE GOOD DECISIONS, rather than setting up a bunch of stringent rules for their kids to follow…and a weird artificial process for finding a mate.


I think what disgusted me the most was to watch people’s responses to the one successful courtship at our church that had actually ended in marriage. Everybody thought that this couple had lived out the absolute ideal. Yet (and granted, I could be wrong, as I did not know this girl that well) I got the distinct feeling, from my position as an observer, that the girl in this couple was woefully ill-prepared for marriage to the young man. She seemed very stiff and uncomfortable whenever the two of them were together in public. I can’t imagine what it must have been like for her, to go from living with her parents (she was about 20, had never been to college and had never held a real job aside from giving piano lessons to some of the other kids from church) to – within a period of about 3 months – having gone through a whirlwind courtship with someone she’d hardly spent any time alone with, to being engaged, to getting married to him.


I should probably quit this rant. But courtship and the legalistic excesses that I witnessed are subjects that really get me hot under the collar, almost more than anything else within SGM. There are extremes that NOBODY could ever address in a single sermon.


Here is a response to Kris' comment - - someone's personal experience of this courtship, purity, father-owning-daughter's-heart culture.  Read how church leaders used their authority in ways that were really out of line.  It's sad.

That’s bad. But it gets carried to even greater extremes in other churches, where people’s paranoia and subjective interpretations of the book are involved.


The doctrines of this man (Josh Harris), difficult enough in themselves, provide a ready platform for fundamentalist hypocrisy in the church. Fanatical proponents of “Kissed Dating Goodbye” methodology ultimately trashed my reputation in my old church (it was found out I “went too far” with my ex-fiance). They stalked around with lists of requirements for their future wife/husband. The sexes avoided each other and were embittered. Elders/deacons kids got a lot more freedom even though they weren’t above messing around at times. The singles had a gossip network by which others were “warned” as to who was “marriage material” and who was NOT. If you didn’t make the lucky few, people were distantly polite & emotionally absent in the youth group; you didn’t have a chance at making friends.


Josh, I don’t believe you intended for extremes to happen. But you have muddied the pond for a couple of generations now. Many of us are so cynical that we have resigned ourselves to singleness. Some of us had meaningful, pure relationships with Christian sisters that have been destroyed because of confusion on topics like “emotional purity” (we don’t want to cheat on our future spouses by opening up). You are in a position of great recognition and authority. You have the responsibility to set a better example…”

Who is to blame for all of these legalistic excesses?  I cannot be sure.  It seems Josh has tried to clear up some misunderstandings, but there is definitely something still amiss in this "courtship culture".  I personally don't think Josh Harris is to blame for what has occurred in the homeschool movement and courtship culture, but the books played a part.

I believe the problem occurred when pastors, leaders, and fathers went above and beyond what is normal involvement in the lives of their congregants and used their power to control and shame their flock/adult children.