Round and Round We Go: More Court News!!!

We have a new update:  The other original mother on the case has now been voluntarily dismissed from the case yesterday.  WOOHOO!!!!!  I am so thrilled for this family!!!

Admin note:   My daughter and I have discussed this and because this case is so public, we have just gone along with that and have used our real names here.  But I have been careful about disclosing the identity of the other defendants (except for Meaghan who has now been posting publicly).

When Chuck O'Neal filed the lawsuit, it made our names public in the courthouse documents which also meant that the public could access those documents.  I am normally a fairly private person on the internet.  Chuck changed that for me.  My kids tell me that you can Google search "Julie Anne" and see pictures/articles of me on the first page and pages and pages afterwards, as well as videos on YouTube, you name, it.  I can't hide.  OY - so much for privacy.  Thanks, a lot, Chuck.   But in the meantime, if I discuss the other former defendants, I will not be naming them.   In this discussion, I will be referring to them as "Kay" and "Jay".

Since most of my readers have probably not read the legal documents, I thought it would be interesting to show exactly what  Chuck attributed to Kay and Jay so you can see what he calls defamation:

Their attorney, Herb Grey, did a fantastic job representing Kay at the hearing, noting several reasons why Kay could not possibly be charged with defamation, any one of which should have dismissed her from the case.  Obviously, Herb was compelling enough that the "other side" decided not to fight it anymore.  Let's see why.  I blanked out the names.

Here are Jay's alleged defamatory remarks (keep in mind Jay was dismissed before the hearing):

Is the above defamatory?  What do you think?

And here are Kay's alleged defamatory remarks that Herb Grey defended.  Keep in mind that these comments were posted "Anonymously" and Kay does not ever recall making these remarks. 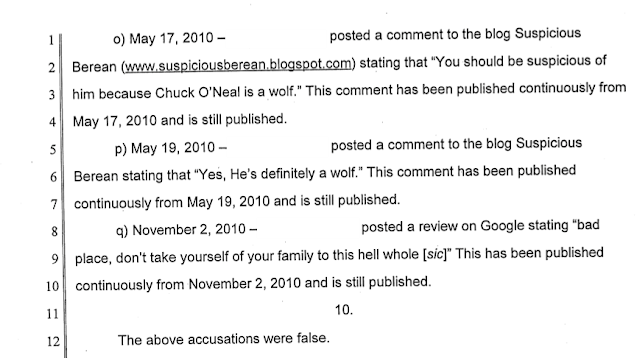 The link mentioned above shows the full context here.  You will also see that someone came to the defense of the pastor in the comment section.

Well, Congratulations, Kay and Jay - we're thrilled that you are now free from this mess.  Now you may resume normal life!   Praise God!