Chuck O'Neal's Minister's License is Revoked and Warning to Readers! 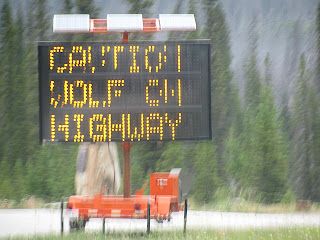 Hey folks, we took a trip for a few days and have been chill-axin' a bit after a 10-hour-drive in adverse road conditions yesterday, but this needs to be addressed.  During my time away, I became aware that Ken Silva of Apprising Ministries wrote an article announcing that my former pastor, Chuck O'Neal, had his minister's license revoked.  I'm not sure when this took place, but you can read about it in the link below.  Most of the article is old news to most of my regular readers, the new info is at the bottom of the article.

A pastor in the group affiliated with BGBC contacted me in early in June.  He became aware of the lawsuit when someone heard about it from the media and asked him about it.  After reading the blog, he then contacted me via the blog e-mail address to find out if Chuck O'Neal had given any notice or indication of dropping the lawsuit.  I told him that as far as I knew, O'Neal had no plans of dropping the lawsuit.  He was was genuinely sorry to hear about the lawsuit and said he was praying for me and all involved.

Now, some six months later, I found out that Chuck O'Neal's minister's license was in fact revoked.  I do not have any information specifically why O'Neal's license was revoked.  No one has told me any reason and I have not asked.   I have suspicions, but they are just that, suspicions.  I do not believe his license was revoked because of information on my blog or solely based on stories they may have heard from former members.  I do not believe his license was revoked primarily because of the lawsuit.  The powers that be obviously must have some compelling reason(s), to have taken this action, but I simply do not have those reasons and I suspect they would not disclose them to me even if I asked.

That said, this has been a long and difficult road.  When I wrote my first Google review, it was with the intent to tell our experience so that others could have this information available during their church decision-making process.  We all know the story how Google reviews were removed, I was sued along with 4 others for defamation, we went to court and won.  This should have been the end of the story.

When we discuss spiritual abuse, we are typically discussing the kind of spiritual abuse that occurs while people are attending their church.  This is a bit odd.  What we have seen (and my readers continue to see) is that this spiritual abuse has continued long after we have left the church, some 4+ years later, even after a lawsuit was initiated in an attempt to silence us and our words (silencing = form of spiritual abuse).  All of this behavior is spiritually abusive.  A pastor is still trying to control what we can and cannot say.

Chuck originally said the story was about slander and defamation.  A big issue that got a lot of attention from Chuck and the media was my phrase about a known sex offender at the church with no known safeguards in place.  This phrase was labeled by the plaintiffs as defamatory and part of the court hearing.  It was listed in the court documents.   Chuck O'Neal and BGBC lost the lawsuit.  Now, after he's had his day in court in the civil court process that he initiated, he has still been complaining on his blog, on business cards being handed out (anti-evangelism business cards, anyone?) in the Beaverton, Oregon area, on magnetic car advertisements with information directing people to his Impostor blog saying that Meaghan and I are women of mass destruction and that Meaghan has reported Chuck and his son, Charlie, as sexual offenders.

I will speak on this issue once and for all regarding Chuck's allegations that Meaghan Varela reported him and his son to DHS for sex abuse.  I have never known Meaghan to be dishonest.  Meaghan told me what she told DHS soon after contacting DHS and I wrote what she told me on my Google review and later on my blog.  I am not one to mince words.

If I had any inkling that Chuck O'Neal or his son, Charlie O'Neal, were sex abusers, I would have marched my derrière to the DHS office myself and reported him/them so they could investigate.  There is no way in HELL that I would ever have withheld that kind of information from my Google reviews or blog.  Protecting victims of abuse is just too important for me.  For him to accuse us of reporting him/them now, after the court hearing, is ridiculous.

These are allegations that I believe Chuck has concocted himself.  I believe that his blog, the DHS report,  and the attorney letter filled with discrepancies are solely  diversion tactics to shift the focus onto Meaghan and me, rather than what we know to be true and has been evidenced to the world via the very public lawsuit:  that Chuck O'Neal lost his lawsuit and is acting like a Spiritual Wolf.

You may have noticed after we won the court hearing, I attempted to discontinue the use of the full name of BGBC on this blog.  I changed the blog name to BGBC rather than spelling it out.  BGBC was referenced as "my former church."  I also did the same with Chuck O'Neal's name, "my former pastor."  I am and have been ready to move on.    There have been no new accusations from us.  We have said what needed to be said.  The civil court made its ruling.  The only opinion that matters to me is God's and I believe I have done what God would have wanted:   to shine the light of truth on a very dark situation that was destroying people's spiritual lives.

My original post was going to stop here, but this evening, I was alerted to a new situation that needs to be shared in a more visible way.


A friend alerted me to this comment left at The Wartburg Blog today:

Here was the response I left for Melissa at The Wartburg Blog site:

Wow, Melissa. I guess nothing surprises me anymore. Do you live in Beaverton? One would wonder why he would think someone who most likely doesn’t live anywhere near Beaverton would care about his links. How did he get your e-mail address?

Even though he got his degree in psychology, he won’t be seeking therapy. And since no one goes outside the church for counseling and he thinks he is the only one qualified to counsel, that’s out of the question. Maybe his wife would submit to his counseling.

I notice he doesn’t come to TWW anymore, however, he seems to have time to keep up with comments here (adding one this afternoon): http://toddrhoades.com/pastor-starts-website-to-attack-churchs-attackers/

Notice how he corrects a pastor who called him out. Also notice how he refers to my mentioning of the word “mediation”, but doesn’t say anything beyond that. And he does not say a thing about his recently revoked minister’s license. Wonder why?


After typing that response, I notice "Melissa" posted a comment here on my blog.  I've taken a screen shot of the comment and my response: 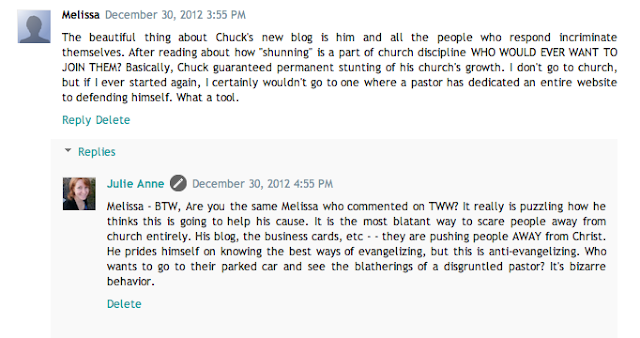 Here is Melissa's response to me.  She mentions Huffington post and this is the article Melissa is referring to:  Huffington Post.


I wholeheartedly agree with Melissa's words above.  I am very disappointed that Chuck has decided to contact people like this and need to issue this disclaimer:

WARNING to BGBC Survivors Readers:  If you attempt to leave a comment at the Impostor Site or send Chuck O'Neal a personal e-mail, he may keep it on file for months or longer to use as he wishes.  If you do not wish to receive any e-mails from him, please do not contact him via his blog or the church e-mail address.  This is very disturbing behavior.