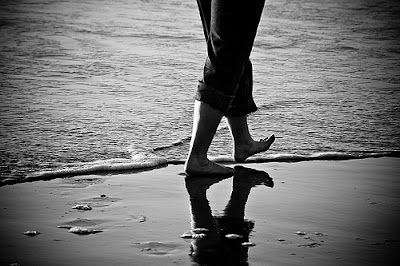 There were people who warned me that my former church was not a healthy place.  They were concerned by what they heard when they listened to recorded sermons.  They were alarmed when they visited the church.  One friend had gone to a high school graduation ceremony for a few homeschool graduates.  The pastor spoke and presented a gospel message.  I cringed upon hearing the message.  She heard it, too.  I didn't find out that it bothered her until several weeks later.  She didn't want to offend me, but finally told me.  This was someone I highly respected.  Listening quietly, I tried to find some truth in what she was saying.  There was truth, but I brushed that aside.

Another friend had listened to some CDs of sermons.  She, too, did not like what she heard and was worried for us - it written on her face.

There was one more friend.  This was discussed in an earlier comment:


One lady nabbed me from our homeschool co-op to talk with her in her van.  We spent about an hour talking.

She was beckoning and pleading with me to really look at what was being preached.  I remember thinking at the time that she was ignorant or maybe making a big deal about nothing.  Parts of what she said was true, but my mind convinced me she was going overboard.  I'm eating my words now.


It's so strange to think back and try to remember what was going through my mind.   There must have been enough good going on in the church that it made me overlook the red flags.

I told myself was that although I knew my friends meant well, they were not at the same place as me spiritually.  Our family was moving on spiritually.  We were growing and maturing in our faith.  I told myself that their church was stagnant.  They weren't going anywhere.  They were weak Christians.  We wanted pure milk, not watered-down teachings.  Our sermons were refining us.  This was real Christianity, not some easy-believism-type of Christianity where the tough issues of sin were ignored.  There was an element of pride that we were better than them.  I might have even thought that they were wasting my time by trying to talk me out of this church.

Today, I am friends with only one of the three mentioned earlier.  My response created a division in our relationship, and sadly, we drifted apart.

There are some questions that I still have to this day:  why did I discount the words from trusted friends - friends who had good discernment?  Why did I not listen to the warning in my own heart?  These are difficult questions.  I feel pain when I think of these losses.  These answers may never come.

When the wicked are in authority, sin flourishes,

but the godly will live to see their downfall.

There was another aspect with friends/family who did not attend the church that affected our relationships.  We felt obligated to be at all church meetings.  I felt guilty when I was at at a family gathering and having fun because I was "supposed" to be at church.  I wondered what I was missing at church and felt that by not being there, I was less spiritual or they would think we were not taking our Christianity seriously or were backsliding.  I felt guilty for not being there and so it was difficult to fully enjoy the family gathering.  If I stayed at church instead of going to a family event, I felt guilty for missing the family event.  When my son started singing in the choir at the local high school and the concerts conflicted with the Wednesday evening service . . . . more guilt.   I was the choir accompanist, too, but I still felt guilt.  There was no way to escape the guilt.  Pastor Ken touched on this subject earlier and nailed it for me:

Ken  July 17, 2012 12:37 PM  As for the guilt, it's a double-bind, really.  I was horribly guilty for mistreating my parents, siblings, old-friends who hadn't "seen the light" as I had, etc., (still apologizing to this day!), but also, I was constantly dealing with a nagging guilt for being/seeming less committed to this new, "serious" church that I'd joined, and was gradually giving away more of my life to, piece by piece, friend by friend, dollar by dollar.  I felt guilty for being at my families' events/parties, etc., and guilty for NOT being at them!  Ug.  I'm flash-backing...going to go on a walk and thank God for saving me, once again and again!

So, where do we go from here?  We lost relationships because of attempting to meet the church obligations.  Should we go back to them and apologize?  She we try to resurrect those old relationships or do we simply move on?

When the godly are in authority, the people rejoice.
But when the wicked are in power, they groan.

Although I did lose relationships, I'm very thankful for the core group of friends who didn't turn their backs on me.  They watched the process from a distance and welcomed me back.  Those are dear, dear friends.  Thankfully, we've been able to discuss what happened and our relationships have been restored.  But it is still sad to think of the time lost - the memories that could have been - - yes, still more grieving.

This chapter of your "life-book" is dark, strange, full of surprises, wins and losses.  I know it's been pretty dark and challenging and uncertain.  But we DO know the end of the book!  The great Shepherd personally returns for His flock.  Errant teachers are corrected and judged appropriately.  Damaged sheep are finally and forever healed, and the world finally sees Jesus, again!


Amen!  This is where we need to focus.  The past is the past.  While there is a loss to grieve, we do need to look ahead to the future and fix our eyes on the author and finisher of our faith.

Therefore we also, since we are surrounded by so great a cloud of witnesses, let us lay aside every weight, and the sin which so easily ensnares us, and let us run with endurance the race that is set before us, 2 looking unto Jesus, the author and finisher of our faith, who for the joy that was set before Him endured the cross, despising the shame, and has sat down at the right hand of the throne of God.   Hebrews 12:1-2