Who Will Pay for the Defamation Lawsuit Against Former Members?

A man without self-control
is like a city broken into and left without walls.
(Proverbs 25:28 ESV)

My attorney sent me a copy of the court documents submitted for fees.  I expected the fees to be a little higher, but they are still a big chunk of change.

Here is the top portion of the document: 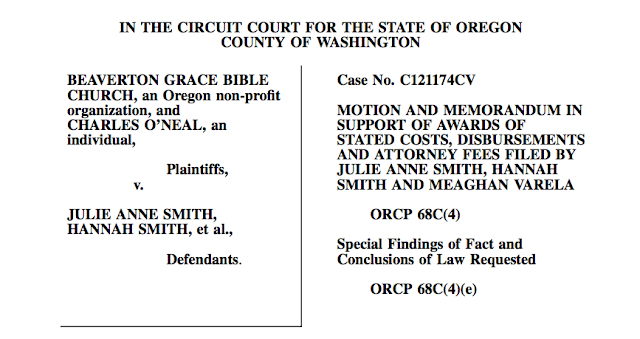 Many people have been wondering how much the pastor/church will have to pay in court costs and legal fees for the this case.  Below is a screen shot of the  document. (If you like legalese, you can read the full 26-page document here.)

For the record - this does not cover any travel/food/lodging expenses, nor does it cover 1-1/2 days off work for Hannah.  I live more than 4 hours away from the courthouse and required an overnight visit for both court dates.  Because we were not required to be in court, our expenses were not covered.

I want to post some of what I consider to be key parts of the legal document here.  When our story spread through the media, the overwhelming response was, "what in the world?" and "what kind of pastor would do something like that".   People were outraged and rightly so.  Some Christians expressed that they were ashamed of that response and were embarrassed.  In comments on articles on the internet and on my blog, many quoted the verse from the Bible  where Christians should not sue other Christians (1 Corinthians 6), others quoted the verse about turning the other cheek (Matt 5:39), etc.  Both believers and non-believers alike were overwhelmingly shocked and appalled by the idea of suing another  Christian.  They were not only shocked at the lawsuit, but equally appalled by the dollar amount of the lawsuit.

One of the primary purposes of the anti-SLAPP motion which my attorney filed is to prevent frivolous lawsuits against free and protected speech.  Once an anti-SLAPP motion is filed, it prevents either side from gathering more information or "discovery" (extensive interviews and interrogations, confiscating materials, e-mails, etc,) which can take months, is costly, and can keep the case stuck in the court system for perhaps years.  I was served the subpoena on March 1 and received the judgment on July 26.  Nearly 5 months is a very quick result for a lawsuit (yet at times it felt like eternity and there was an emotional toll on me and the family).

Hopefully, my case will serve as a reminder to those pastors who get worked up from reading negative and emotional responses from their former church members that a lawsuit may not be the best course of action for them financially or otherwise.

Every single attorney who read my subpoena - both local and national - indicated to me sentiments like this:  the lawsuit is ridiculous,  the amount of the lawsuit $500,000 is absurd, and the pastor/church are foolish to waste their time and money on something so frivolous.   Some attorneys even suggested the possibility that any attorney who might take on such case could be brought before his peers for some sort of disciplinary measures for agreeing to take such a case in the first place.


Here are some standards in Oregon that pertain to the awarding of fees.  I found it quite interesting.  It is pretty clear that the court system does not look favorably on frivolous lawsuits.  The court does consider exorbitant damage amounts, the reasonableness of claims, and diligence in filing legitimate claims.

Factors considered in calculating the award of fees are set out at ORS 20.075(1) and (2). The ORS 20.075(1) factors usually are considered to determine whether to award fees at all but also play a role in evaluating the reasonable amount to award when fees are mandated. Those factors are:

(a) The conduct of the parties in the transactions or occurrences that gave rise to the litigation, including any conduct of a party that was reckless, willful, malicious, in bad faith or illegal.

(b) The objective reasonableness of the claims and defenses asserted by the parties.

(c) The extent to which an award of attorney fees in the case would deter others from asserting good faith claims or defenses in similar cases.

(d) The extent to which an award of attorney fees in the case would deter others from asserting meritless claims and defenses.

(g) The amount that the court has awarded as a prevailing party fee under ORS 20.190.

(h) Such other factors as the court may consider appropriate under the circumstances of the case.

In the original complaint, the pastor/church hand selected alleged defamatory phrases which were taken out of context.  My attorney had to go through each and every phrase, bring the context to the court and explain my point.  This was a very time-consuming and costly effort, but was necessary because if even one phrase was ruled as defamatory, I could lose the case.  Taking those many phrases out of context was not helpful for the plaintiffs whatsoever:

The "reasonableness" of conduct factors enumerated under ORS 20.075(1)(a), (b), (d) and (e) strongly favor Defendants. Plaintiffs’ Complaint and Amended Complaint alleged an intent to seek punitive damages. All of the 17 claims against Julie Anne Smith and the 4 against Meaghan Varela were based on isolated words and phrases, and all lacked any context or explanation through properly plead innuendo, thus failed to conform to Oregon pleading rules [ORCP 18], indicating a lack of careful consideration prior to filing suit for $500,000.


Here is more from my attorney on how each alleged defamatory phrase needed to be defended:

There were 17 different claims against Julie Anne Smith, 1 against Hannah and 4 against Meaghan Varela. Each statement had to be moved against separately and the basis for the defense set out in detail (religious belief, opinion, opinion based on state facts, etc). The number of claims was the major reason that legal research and individual motions took the amount of time invested.

Here my attorney discussed Hannah's part of the lawsuit - and how the inclusion of her words as defamatory in the lawsuit were not reasonable:

The single claim against Hannah Smith was not well-taken. It is very unlikely many Oregon attorneys would have thought it reasonable to include this young woman in a suit for $500,000 in damages for her single online comment that the Plaintiffs’ were "no-way Biblical." It is even more unlikely anyone would repeat the same allegation in the Amended Complaint after its weakness should have become evident from the discussion in the Smiths’ motions filed on April 27, 2012.

After filing the anti-SLAPP motion, the both attorneys for the defendants got word that the Plaintiff's attorney was going to subpoena another former church member for questioning.  As stated in the subpoena, the former church member was supposed to bring all documentation related to our former pastor to the pastor's attorney's office at a specific date/time for questioning.  This did not go over real well, to say the least.  Can you imagine first seeing your friends getting sued and then finding out that you are getting called in for questioning?  Yikes!

This action was completely against the provisions of the anti-SLAPP law.  The plaintiff's attorney needed to be "reminded" of this violation.  My attorney discussed this issue in the motion for fees because that, too, involved additional time and money.

Plaintiffs also served a "notice" of intent to depose other church members not named in the lawsuit on May 3, after the Special Motions had been filed, which was a violation of the automatic stay of discovery [ORS 31.150] arising from the earlier filed Special Motions. The attempt to circumvent the stay was not reasonable. Other litigation conduct by Plaintiffs prolonged litigation and caused additional effort and response by Defense Counsel, discussed more specifically under "hours of effort," pp. 8-17, post.

The total figure I added up was $44,372.55 for defending Hannah, Meaghan and me.  The total amount was approximately $16K for the two defendants who were dismissed early on, so the overall total for all defendants works up to be around $60,000 for the church/pastor to pay (approximately 60 hours of work charged for the dismissed defendants and approximately 108 hours to defend Hannah and me).

Now the question is:  who will pay?  The pastor or the church?


One of the most disconcerting aspects of this case for me is realizing the strong possibility that the money to pay this huge bill will most likely come from the tithes and offerings of church congregants.  Will the pastor feel the effects from his pocketbook?  It's ridiculous to use God's money to pay for a man who got his feelings hurt - utterly ridiculous!  Even if what I said on Google or my blog was not true and truly defamatory, most reasonable pastors would know to leave the comments alone - simply ignore them.


I hope the current church members think carefully about aligning with a pastor who sues and now may use their tithe money to foot the bill of their pastor's foolishness.

What your eyes have seen
do not hastily bring into court,
for what will you do in the end,
when your neighbor puts you to shame?
(Proverbs 25:7-8 ESV)

Email ThisBlogThis!Share to TwitterShare to FacebookShare to Pinterest
Labels: Lawsuit